Performing simple science experiments for kids like jumping raisins will bring your lessons on acid-base reactions, density, and buoyancy to life. So, grab your ingredients and turn up the music, it’s time for a raisin dance-off!

Here is a step-by-step guide to performing the swimming raisins experiment.

You only need three simple and inexpensive ingredients for the dancing raisins experiment.

A Step-by-step Guide To Perform The Jumping Raisins Experiment 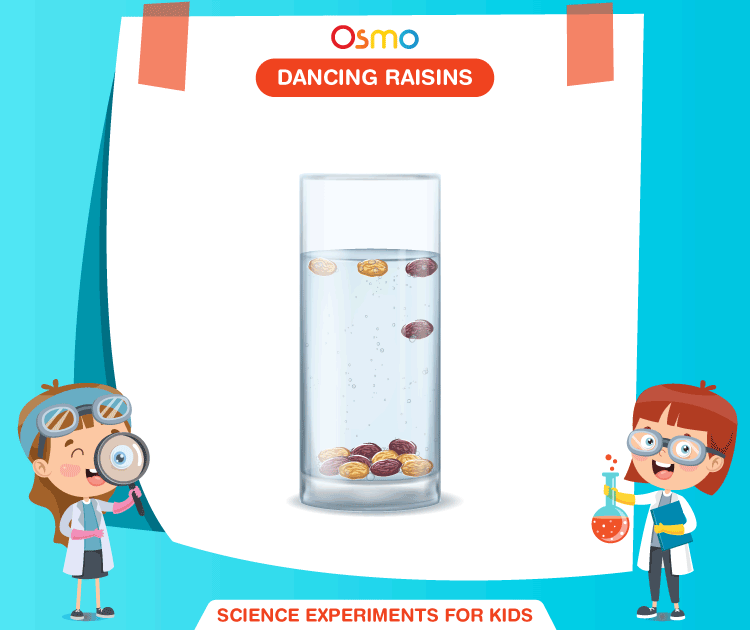 Fill the glass with the clear soda, but don’t fill it to the brim.

Drop a few raisins into the glass. What do you see? Do the raisins sink or float on the surface?

Now you just need to sit patiently and observe the glass. You’ll notice that the bubbles in the soda attach themselves to the raisins. Slowly, the raisins start floating to the surface. Then, they fall back down and go back up again in a never-ending dance.

It might take a while before the raisins start moving and dancing. Little kids will be awed by how the raisins move up and down the glass and dance in the soda. The raisins will continue moving up and down and dancing until soda goes flat and most of the carbon dioxide has escaped.

Another Way To Perform The Swimming Raisins Experiment

Here is the step-by-step guide to making those yummy raisins dance:

The Science Behind The Dancing Raisins

When the raisins were dropped into the soda, at first, they sank to the bottom of the glass. This happened because the raisins are denser than soda. Objects with a higher density sink, while those with lower densities float.

Want to know if other objects exhibit the same behavior? Do you think strawberries can dance like those raisins? Or a wad of scrunched-up tinfoil? The experiment can be performed using other materials apart from raisins, like dried blueberries, raspberries. You can use anything with a slightly higher density than water and an irregular surface to perform this experiment. It needs an irregular surface for carbon dioxide bubbles to attach themselves. Do this activity at home and see if those materials dance like the raisins.

Kids love performing Science experiments. Such simple science experiments not only entertain kids but also help them learn scientific concepts practically. Dancing raisins is not only a fun activity for children it also helps them understand their science lessons on density, acids, bases and buoyancy better.

Why You Should Do The Dancing Raisins Science Experiment?

Watch Raisins Boogie In Soda With The Dancing Raisins Experiment

They might not have hands and legs, but raisins can definitely dance! This activity is sure to draw excited squeals and it will ensure your kids have a lot of fun. Additionally, the easy to perform dancing raisins experiment will help your child learn some important scientific concepts.

The jumping raisins experiment will help children learn about concepts like density, acid-base reactions and buoyancy. All you need are a few household supplies and some excited kids to do the experiment.

What are the materials required for Dancing Raisins?

What is the science behind Dancing Raisins?

The science behind Dancing Raisins is that kids get to learn the important concepts of density, buoyancy and carbon dioxide bubbles, and the behavior of the object when mixed together.